Find background information and curated funder resources for the 2020 Census.

What is the Census? Why Is a Complete Count Important?

The Census, held every ten years and mandated by the US Constitution, is a national count used to determine critical decisions, like political representation and how much federal funding will go to communities. When a community is undercounted by the Census, it results in less political representation and less federal funding for those communities. The 2020 count will have a decade-long impact on our state, cities, and towns.

Based on the latest census estimates, approximately 22% of Connecticut's current population (or 805,756 people) lives in hard-to-count (HTC) neighborhoods, and it is estimated that Connecticut will lose $2,900 in federal funding for every person not counted. Although Connecticut state government has been slow to allocate funds for Census 2020, several community foundations challenged the state to come up with funding. In October the state announced a commitment of $500,000 in discretionary funds for Census 2020 community outreach.

CCP, as well as the Hartford Foundation for Public Giving and the Community Foundation for Greater New Haven, sit on Connecticut’s Complete Count Committee. In this role, CCP has been advocating for the state to develop a strong plan and commit the necessary resources to support an accurate census count in 2020. We were delighted to see that the State made a commitment of $500,000 to support the 2020 census, but understand that more resources will be needed.

Meanwhile, many have begun the work to ensure an accurate count. There are over 100 local complete count committees launched. Key nonprofits are developing infrastructure to support statewide capacity, and many nonprofits are developing plans and activities. This is encouraging, but more resources and organizations are needed. CCP is in the process of pulling together a webinar for funders on the current state of play, and will share details with you as soon as they are finalized.

Do the communities you serve and fund belong to any of these historically undercounted communities? Undercounting impacts political rights and access to public and private resources. The The Center on Poverty and Inequality has published Hard to Count Fact Sheets that explain what makes populations hard to count and how undercounting can impact political rights and access to public resources. You can explore Connecticut's HTC neighborhoods in the Census 2020 HTC Map for Connecticut >>

Census Partner Specialists
Connecticut is part of the New York Regional Census Office, but there are partner specialists working locally to raise awareness and promote participation in 2020 Census. Here is a list of Connecticut's Partner Specialists with their assigned territory. To reach a specialist contact the New York Regional Census Office: 800-991-2520; New.York.Regional.Office@census.gov. 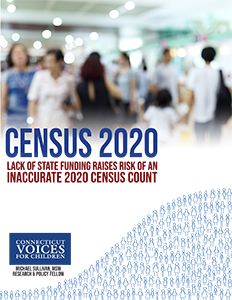 Connecticut Voices for Children's report, Census 2020: Lack of State Funding Raises Risk of an Inaccurate 2020 Census Count, reveals the likelihood and heightened risks of an inaccurate count during the 2020 Census. In response to these findings, CT Voices is urging state leaders to prioritize statewide planning and investment in Census outreach and education to ensure our state isn’t impacted by the far-reaching consequences of an undercount to residents, state and local governments, dozens of federal and state programs and benefits, as well as Connecticut’s democracy and economy. Connecticut Voices for Children is grateful to the Community Foundation of Greater New Haven and the Melville Charitable Trust for providing funding to support the report.

Connecticut Council of Philanthropy was one of 33 philanthropy serving organizations that signed onto a letter opposing the addition of a citizenship question to the 2020 census. They are aligned with more than 300 Foundations that signed their own letter, including CCP members: Fairfield County's Community Foundation; Hartford Foundation for Public Giving; Melville Charitable Trust; and Northwest Connecticut Community Foundation. These efforts were the result of a partnership between United Philanthropy Forum and the Funders Census Initiative of Funders’ Committee for Civic Participation. Both letters were submitted on August 3rd to the Department of Commerce and the Census Bureau along with thousands of other comments from leaders and concerned citizens from across the country.

Census 2020 Menu of Options for Funders

All around the country, philanthropy is mobilizing to ensure a fair and accurate census 2020. As your foundation is considering how it may engage, the Funders Census Initiative (FCI), a working group of Funders Committee for Civic Participation, and the United Philanthropy Forum have put together a menu of options for funder participation.

The US Census Bureau offers materials about the 2020 Census that can be shared with the public and provides resources that explain what partners can do to contribute. Materials include a recruitment tooklit, a guide for complete count committees, toolkits for congressional and state and local officials, facts sheets, infographics and visulaizations, promotional materials, and more.

Get Out the Count (GOTC) Toolkit

The Census Counts Coalition's tookit aims to support outreach efforts so every person in every community is counted. The toolkit pulls together resources on background, Get Out the Count (GOTC) outreach, cybersecurity, an accessible GOTC plan, and other materials. Additional sections will become available over the coming weeks.

Funders’ Committee for Civic Participation has provided an updated “Key 2020 Census Milestones” fact sheet, based on the very latest announcements from the Census Bureau about evolving census activities and schedules.

Council for a Strong America

Council for a Strong America is a national, bipartisan nonprofit that unites five organizations comprised of law enforcement leaders, retired admirals and generals, business executives, pastors, and prominent coaches and athletes who promote solutions that ensure our next generation of Americans will be citizen-ready. Its Census 2020 resources include:

Find new fact sheets, briefs, and other resources. Topics include counting rural areas, counting people experiencing homelessness, and on the importance of an accurate census for the health care sector.

The Count All Kids committee is a group of national, state, and local children’s organizations and allies that have joined together to ensure our nation’s children are counted in the 2020 Census.

CensusCounts.org is a new primary resource site for stakeholders, administered by the advocacy group organizing much of the stakeholder efforts nationally, The Leadership Conference on Civil and Human Rights. More information will be added to this site as they branch out from policy/advocacy issues to Get Out the Count phase.

Libraries and the 2020 Census

For funders interested in children, youth, and families, The Annie E. Casey Foundation has created a funders roundtable to address challenges facing these populations; 2020 Census is one of the key focuses. They are hosting conference calls and webinars, among other activities.

Connecticut is only 12% rural, but those areas make up 62+% of our land area, and the state received more than $143 million in 2016 for six largest rural assistance programs alone. This new analysis is from Andrew Reamer, George Washington University Institute for Public Policy.

For those working in partnership with state and local elected leaders, the National Conference of State Legislatures (NCSL) has an excellent nonpartisan resource page on the 2020 Census. The National League of Cities has issued its own 2020 Census Municipal Action Guide.

Preparing for the 2020 Census: Considerations for State Attorneys General

For those who are more politically (nonpartisan) minded, this American Constitution Society issue brief on how State Attorneys General can prepare for the 2020 Census is an intresting read.

Be An Official 2020 Census Partner

Funders that want to receive updates on key 2020 Census developments and programs can sign up to be an official 2020 Census Partner. This doesn't entail much on the partner's end, except to "pledge" to help promote the census in appropriate ways.

Join the funder email list to receive updates and resources. No commitment or membership required.