In CCP's latest Policy Update, we'd like to update you on the State Budget, 2020 Census, and federal issues such as unrelated business tax, SALT workarounds, and a new charity bill.  You can also find a link to our newest report: Response to Financial Challenges: Funder - Nonprofit Survey, and information on the public-private partnership between the State of Connecticut and the Dalio Philanthropies.

The State's Biennial Budget for fiscal years 2020-21 was passed in the legislature on June 4, and although the 2019 session closed on June 5th, Governor Lamont has proposed a special session on tolls.

The Alliance recently held a webinar on the state budget and produced an "Analysis of Final State Budget FY20-21." Here is a quick overview of their spending plan analysis: 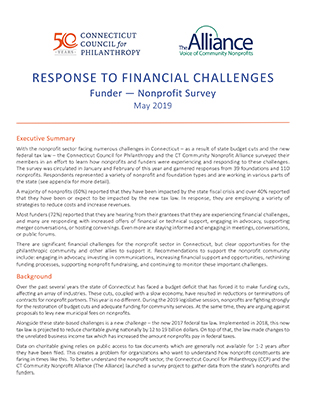 With the nonprofit sector facing financial challenges in Connecticut,  the Connecticut Council for Philanthropy and the CT Community Nonprofit Alliance surveyed their members in an effort to learn how nonprofits and funders were experiencing and responding to these challenges.

The partnership will benefit residents of Connecticut's under-resourced communities, with a specific focus on communities where there is both a high poverty rate and a high concentration of youth (14-24) who are showing signs of disengagement or disconnection from high school. Read more >>

The Supreme Court has issued its ruling in U.S. Department of Commerce v. New York, the case challenging the inclusion of the citizenship question on the 2020 Census. The decision is complicated, but the bottom line is that the question is out for now! From the opinion: "we cannot ignore the disconnect between the decision made and the explanation given.... If judicial review is to be more than an empty ritual, it must demand something better than the explanation offered for the action taken in this case. In these unusual circumstances, the District Court was warranted in remanding to the agency, and we affirm that disposition."

Monday, July 1, 4:00 - 5:00 PM
No matter the outcome of the Supreme Court's decision on the Census citizenship questions, funders, their partners, and grantees have more work to do to ensure a fair and accurate decennial count. Join the philanthropic community for a post-decision discussion with national organizations leading the response, including the Leadership Conference on Civil and Human Rights, NALEO Educational Fund, and Asian Americans Advancing Justice (AAJC). The webinar is is hosted by the Democracy Funders Collaborative Census Subgroup, FCCP's Funders Census Initiative, and the United Philanthropy Forum. CCP is a co-sponsor. Register Now >>

Funders' Committee for Civic Participation (FCCP) provided this compilation of guidance developed and informed by national and state-based groups playing a leadership role in 2020 Census mobilization. Access the resource >> 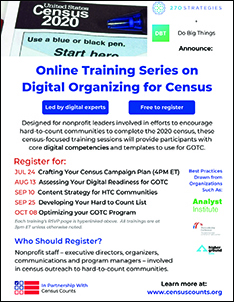 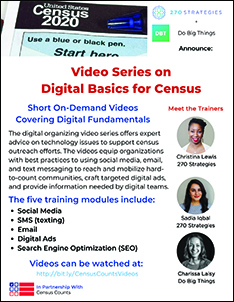 As part of a broader strategy to use digital tools and platforms for Get Out the Count efforts, the FCCP has supported the launch of a Digital Academy, which includes a set of six short videos on introductory digital organizing information, such as use of email, text messaging, and digital ads, and a series of five 60-minute online trainings providing proven digital organizing techniques for census outreach. Access flyers about the videos and the trainings >>

United Philanthropy Forum - 6/17/19: On June 11, 2019, the U.S. Department of Treasury released the final rule and guidance intended to prevent so-called "state and local tax (SALT) workarounds."
Responding to the Tax Cuts and Jobs Act's $10,000 cap on state and local tax deductions, some states created "workarounds" that essentially allowed taxpayers to treat their state tax payments as charitable donations and therefore deduct payment of their state and local taxes from their federal tax liability beyond the $10,000 cap.
The final rule is effective August 11, 2019 but retroactively applies to donations made after August 27, 2018.

Chronicle of Philanthropy - 6/21/19: The House Ways and Means Committee passed legislation Thursday that would repeal a tax on nonprofits' transportation benefits, clearing the way for a floor vote on a provision in the 2017 tax overhaul. Read more >>

Council on Foundation: Washington Snapshot - 5/23/19: Senators John Thune (R-SD) and Bob Casey (D-PA), with Pat Roberts (R-KS) and Ron Wyden (D-OR), all members of the Senate Finance Committee, reintroduced the Charities Helping Americans Regularly Throughout the Year (CHARITY) Act (S. 1475). This bill would encourage charitable giving and make it easier for foundations and other tax-exempt organizations to conduct their charitable mission. Additionally, the bill would expand the IRA charitable rollover to allow for distributions to donor advised funds (DAFs), as well as simplifying the private foundation excise tax from the current two-tiered structure to a flat rate of one percent.