Portion of Ticket Sales for “Community of Caring Night” May 19 to Benefit Victims; Displaced Students, Families to Attend Game vs. York Revolution Free of Charge 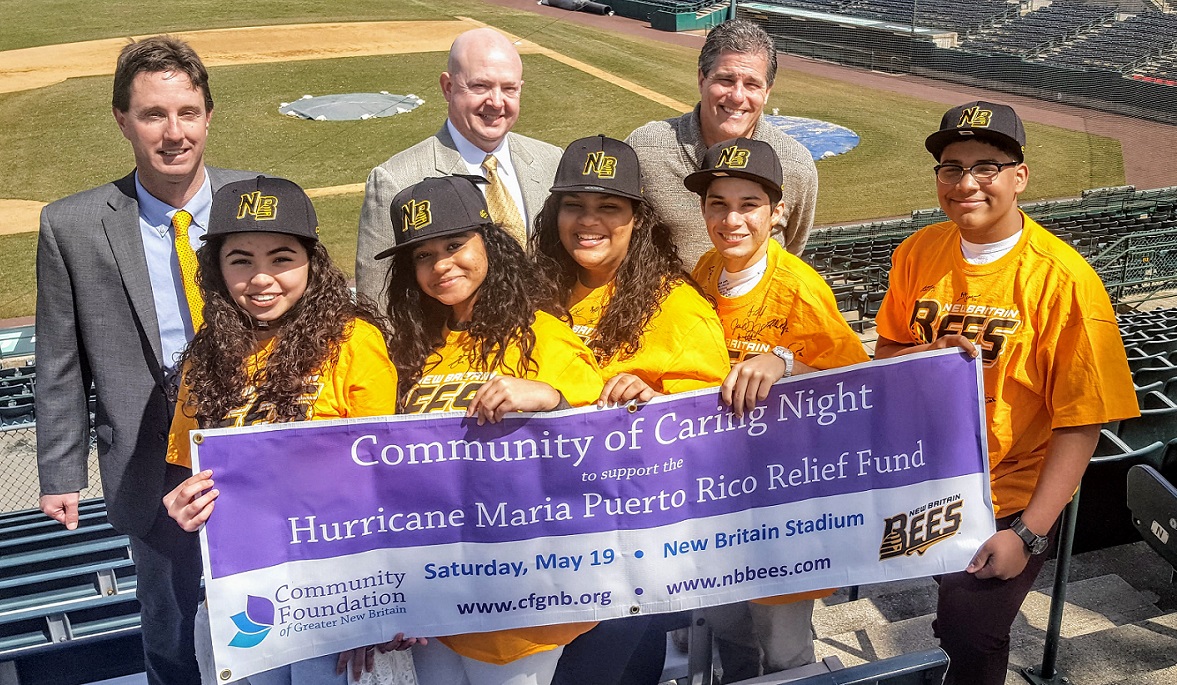 NEW BRITAIN, CT -- The Community Foundation of Greater New Britain (CFGNB) and New Britain Bees professional baseball club will join forces on Saturday, May 19, to raise money for victims of Hurricane Maria and to treat hundreds of New Britain school students and their family members from Puerto Rico displaced by last fall’s devastating storm to a night at the ballpark.

The Bees have pledged to donate 50 percent of all ticket sales for “Community of Caring Night” May 19 at New Britain Stadium, when the Bees take on the York Revolution, to the Hurricane Maria Puerto Rico Relief Fund managed by the Community Foundation. Game time is 6:35 p.m.

“This is a magnanimous gesture on the part of the Bees and their ownership group to make a tangible impact by assisting so many victims of Hurricane Maria both here and in Puerto Rico,” said Community Foundation President David Obedzinski. “We can’t thank the Bees enough for their support of this important fund and look forward to a great turnout on May 19.”

“Giving back to our community is a cornerstone of our philosophy,” said Bees’ owner Vic Picone. “We are privileged to have this unique opportunity not only to support this cause, but to treat those whose lives have been turned upside down by this storm to a great night of family fun at the ballpark.”

To make the evening possible, the Bees are partnering with Ulbrich Stainless Steels and Special Metals, Inc., a world-wide leader in customized metals for the medical, industrial, electronics, automotive and aerospace industries among others, and Beacon Prescriptions of New Britain, New Britain’s premier pharmacy providing efficient, caring, professional, cost-efficient and high quality service. Students from Puerto Rico who are enrolled in the Consolidated School District of New Britain (CSDNB) after temporarily relocating here following the storm, along with members of their families, will have the opportunity to receive free admission and food/drink vouchers for the game. The Bees will work directly with the CSDNB to distribute tickets to families.

According to the CSDNB, more than 260 displaced students from Puerto Rico enrolled in the school system in the aftermath of the storm.

In addition to the students and families being treated to the game, the Community Foundation and Bees plan to salute corporate and community partners who have supported the fund in on-field ceremonies before and during the game. The Community Foundation will host an invitation-only pre-game picnic for major donors and community partners, and the Bees’ will host a pre-game autograph session for all fans.

Fans will have the opportunity to donate directly to the fund at the game at the Community Foundation information table in the concourse and via donation containers throughout the ballpark.

The Community Foundation of Greater New Britain and the American Savings Foundation, with leadership by State Representative Bobby Sanchez of New Britain, New Britain Mayor Erin Stewart and Marlo Greponne of HRA of New Britain, collaborated in late September to establish the fund in the wake of the storm. The fund aims to serve as a central and local charitable hub for those in New Britain and surrounding communities who wish to support, through charitable donations, the more than 3.4 million Puerto Rican citizens ravaged by Hurricane Maria.

More than $42,000 has been raised thus far. Some 30 percent of the fund is being reserved specifically for local agencies and organizations helping displaced residents of Puerto Rico. The other 70 percent will go directly to Puerto Rico to assist with the rebuilding process on the island. The grant application process for local agencies opened in February.

To make a donation in support of the fund, visit www.cfgnb.org/hurricane-maria-puerto-rico-relief-fund.

The New Britain Bees are members of the Atlantic League of Professional Baseball (ALPB) and play their home games at New Britain Stadium. This year marks the Bees’ third season in New Britain. The 2018 season kicks off April 27 in Texas, with the home opener slated for Friday night, May 4, vs. the ALPB’s Road Warriors. For information on ticket packages, group outings and sponsorships call 860-826-BEES (2337) or visit www.nbbees.com.