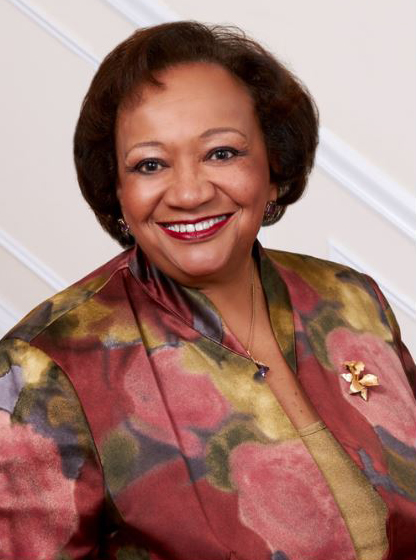 HARTFORD, CT – The Connecticut Council for Philanthropy (CCP) named Juanita T. James, president and CEO of Fairfield County’s Community Foundation, a recipient of the 2019 Martha S. Newman Award. James, a resident of Stamford, CT, will be honored for her demonstrated, sustained, and exemplary service to the philanthropic sector in the state. CCP will formally recognize James at its upcoming conference, 2019 Conference: Reimagining Philanthropy: Strategies for Success, on May 7, at The Omni New Haven Hotel at Yale.

Juanita James joined the Fairfield County’s Community Foundation in 2011. As president and CEO, she is responsible for advancing the organization’s mission of promoting philanthropy to create systemic change in Fairfield County, fostering a vital and inclusive community where every individual has the opportunity to thrive

“Juanita has led Fairfield County’s Community Foundation with laser-focus vision,” said Mirellise Vazquez, executive director of the Tauck Family Foundation. “Juanita also generously gives her time to counsel and mentor emerging leaders in philanthropy, including emerging leaders of color like myself.  Her wisdom and advice are invaluable and the time that she gives you makes you feel valued, important, and affirmed.”

James has made the time to advance the philanthropic sector statewide, including serving on CCP’s board of directors and co-chairing the Fairfield County Funders Network, as well as serving on numerous other boards both within and outside of Connecticut.

“We are delighted to honor Juanita with this distinguished award to pay tribute to her contributions to the philanthropic community of Connecticut," said CCP President Karla Fortunato. "Her strategic leadership at Fairfield County’s Community Foundation, success in building philanthropic engagement in the state, and her commitment to mentoring new leaders make her a perfect candidate for the Martha S. Newman award."

About the Martha S. Newman Award
The award was established in 2007 by the Council to honor the life and work of Martha S. Newman, who before her death in 2005 served as a staff member for several grantmaking organizations. Her combination of firmness and gentleness, her work ethic, integrity and dedication, and her knowledge of community needs made her an invaluable staff member, mentor and friend. Martha Newman set the standard for an exemplary staff member. For more information about the Newman Award including previous recipients visit the CCP’s website.

Juanita T. James Bio
Juanita T. James joined the Fairfield County’s Community Foundation in 2011. As president and CEO, she is responsible for advancing the organization’s mission of promoting philanthropy to create systemic change in Fairfield County, fostering a vital and inclusive community where every individual has the opportunity to thrive

Prior to joining the Community Foundation, Juanita served as Pitney Bowes’ chief marketing and communications officer and enjoyed a 20-year career with Time Warner and Bertelsmann. She is currently a director for Asbury Automotive Group, First County Bank, Rockefeller Philanthropy Advisors, and CFLEADS (Community Foundations Leading Change) and a former board member for the Connecticut Council for Philanthropy. She is also a vice chair of the Board of Trustees at Lesley University, a trustee emerita of Princeton University, and a former trustee of the University of Connecticut. James has been recognized with numerous honors including Stamford Citizen of the Year and Moffly Media’s Light a Fire Award, and has been named one of Savoy’s Most Influential Black Corporate Directors and one of the NAACP’s 100 Most Influential Blacks in Connecticut.

James earned a bachelor’s degree from Princeton University and a master’s degree in Business Policy from Columbia University. She also holds Honorary Doctor of Laws degrees from Mitchell College and Fairfield University, and an Honorary Associate Degree in Humane Letters from Housatonic Community College. James lives in Stamford with her husband Dudley Williams Jr., who is also an active community leader.