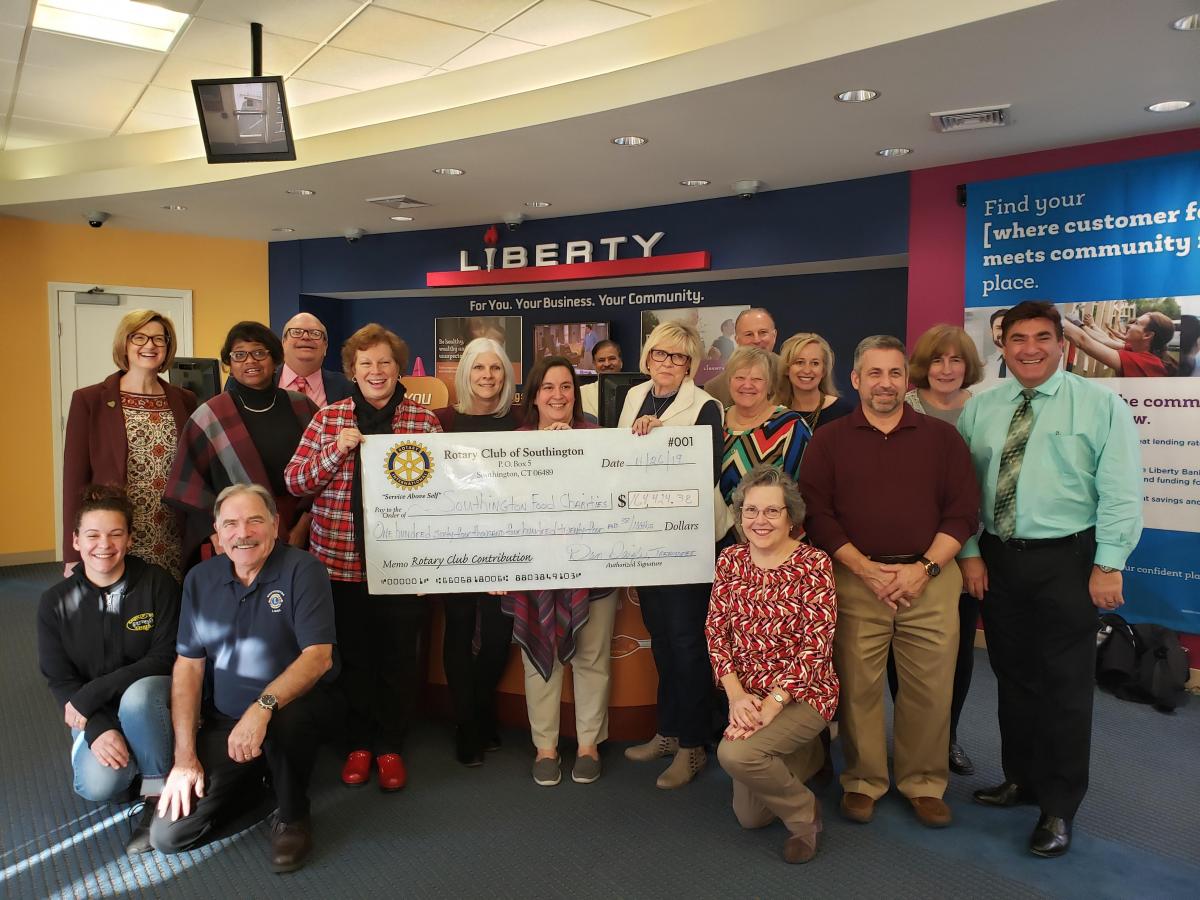 ROCKYHILL, CT -- The American Farm Bureau Federation estimates that the cost of a Thanksgiving dinner remains at about $5.00 per person. Despite this relatively modest price tag, Feeding America tells us that over 400,000 Connecticut residents are food insecure, and will have difficulty paying for the traditional holiday feast.

Now in its 16th year, the Liberty Bank / Rotary Thanksgiving Dinner Drive seeks to offset this food deficit, this year raising a record-breaking $565,000 to ensure there’s enough food on local shelves for the holiday and beyond.

Rotary Clubs pair with their local Liberty Bank branch to fundraise; at the end of the campaign Liberty Bank Foundation matches each dollar raised with 25 cents. All donations received are donated to a local food program.

“It’s expensive to live in Connecticut,” says Sue Murphy, executive director, Liberty Bank Foundation. “Big ticket items, like the cost of housing or child care, mean that at the end of the month many families around the state can’t afford to put a Thanksgiving feast on the table. Our partnership with the Rotary Club helps make that possible.”

This year’s leading fundraisers (including match) were:

This year, 43 Rotary Clubs and the East Haddam Community Lions Club teamed up with the 60 Liberty Bank offices to raise funds. Since the drive began in 2004, it has raised over $3 million, including the Liberty Bank Foundation match. All donations are used to provide food in the communities where they were given.

Rotary is a global network of more than 1.2 million volunteer leaders who dedicate their time and talent to tackle the world’s most pressing humanitarian challenges. Clubs are nonpolitical, nonreligious, and open to all cultures, races, and creeds. Their work impacts families in need in their own communities to working toward a polio-free world.

Since its inception in 1997, the Liberty Bank Foundation has awarded over $12.7 million in grants to nonprofit organizations within Liberty Bank’s market area. The foundation seeks to improve the quality of life for people of low or moderate income by investing in three areas: education to promote economic success for children and families; affordable housing and ending homelessness; and nonprofit capacity building. Along with its grantmaking, the foundation strives to foster the convening and collaboration of nonprofits, funders, business, and government to address community issues.

Established in 1825, Liberty Bank is Connecticut’s oldest bank, with over $5.7 billion in assets and 60 banking offices throughout the central, eastern, and shoreline areas of the state. As a full-service financial institution, Liberty offers consumer and commercial banking, home mortgages, insurance, and investment services. Named as a “Top Workplace” by the Hartford Courant for eight consecutive years, Liberty maintains a longstanding commitment to superior personal service and unparalleled community involvement.

*Asterisks indicate Rotary Clubs new to the drive this year.