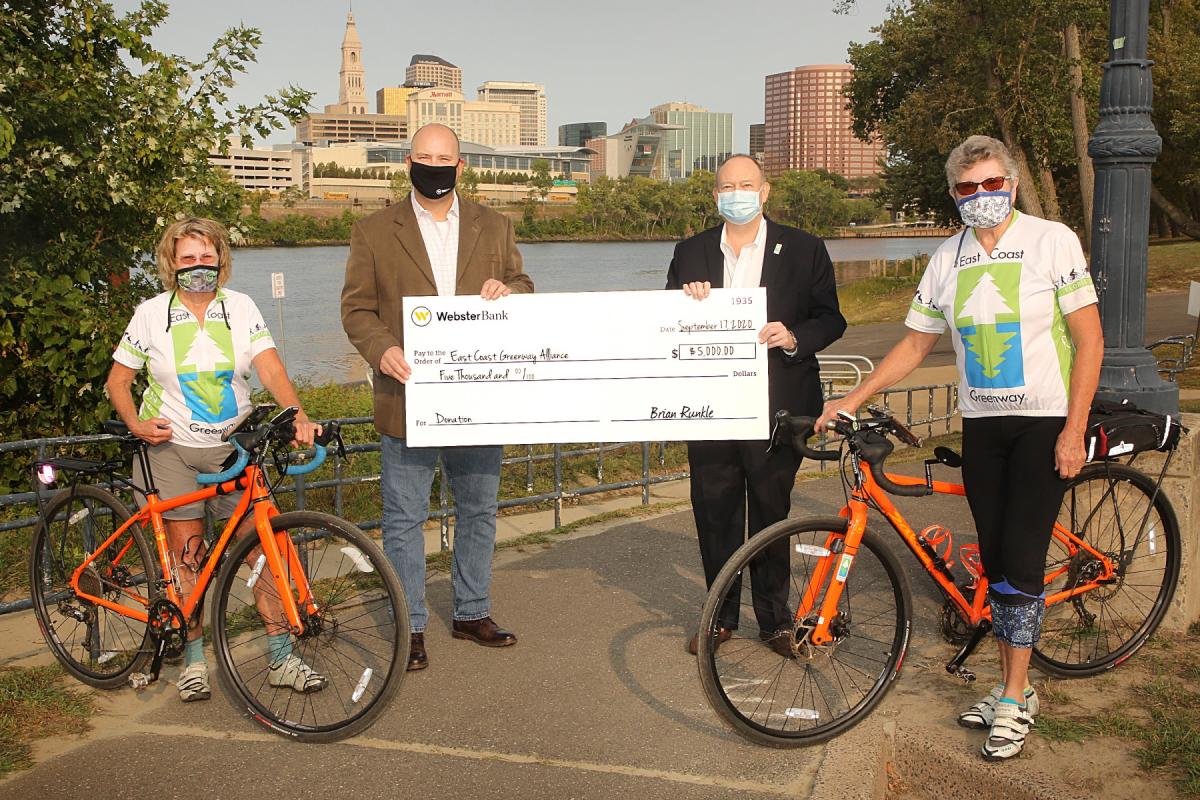 WATERBURY, CT -- As part of its continued commitment to the environment, Webster Bank today announced it has made a contribution to the East Coast Greenway Alliance for the second year in a row.

Nearly 250 miles of East Coast Greenway trails run through Connecticut and Rhode Island including a series of rail trails that showcase the beauty of Southern New England cities and towns from the coast to inland.

Webster Bank made this year’s $5,000 donation as part of its environmentally focused partnership with the Hartford Marathon Foundation (HMF). During the month of August, Webster was the presenting sponsor of the HMF Evergreen Adventure. The event encouraged children and families, to walk, hike, bike, and explore more than 20 state parks, forests and trails in Connecticut and Rhode Island. To emphasize its commitment to sustainability, Webster Bank committed to donating up to $5,000 to the East Coast Greenway by contributing $10 for every registered participant in the Evergreen Adventure.

“The East Coast Greenway has been busier than ever this year as more people seek outdoor solace and adventure during these challenging times,” said Dennis Markatos-Soriano, executive director of the East Coast Greenway Alliance. “This second generous donation from Webster Bank will help us with the added expenses brought on by this increased traffic and assist with unexpected clean up expenses following Tropical Storm Isaias.”

“Webster is happy to be able to once again offer our support to the East Coast Greenway as part of our ongoing commitment to sustainability,” said Brian Runkle, executive vice president of Operations at Webster Bank. “With trails running through many of the places where we live and work, we know firsthand the important role the Greenway plays in helping our communities to preserve and appreciate the environment.”

Webster is actively involved in sustaining the long-term health of the communities it serves. Every year, Webster invest millions of dollars in renewable energy and environmentally oriented initiatives. In 2019, Webster Bank created or maintained commitments for approximately $143 million in loans for renewable energy and energy-efficient components.

About The East Coast Greenway

The East Coast Greenway is a walking and biking route stretching 3,000 miles from Maine to Florida, connecting the nation’s most populated corridor. The East Coast Greenway is designed to transform the 15 states and 450 communities it connects through active and healthy lifestyles, sustainable transportation, community engagement, climate resilience, tourism, and more. The Greenway offers a safe place for bicyclists, walkers, runners, and more — of all ages and abilities — to commute, exercise, and visit new destinations. Learn more: www.greenway.org.