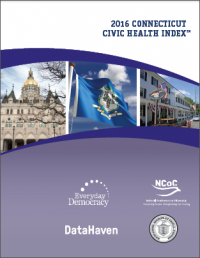 HARTFORD, CT -- The 2016 Connecticut Health Index measures citizen engagement in the constitution state in voting, volunteerism and community involvement. A coalition of groups — including the Secretary of the State, Everyday Democracy, the National Conference on Citizenship and DataHaven — launched the 2016 Civic Health Index Report today. The survey evaluates the depth of citizen engagement through a variety of indicators such as voting, volunteering and other forms of community involvement.