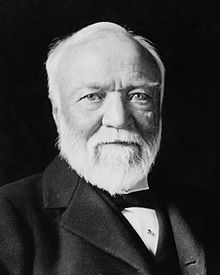 A classic example of philanthropy in action is the Carnegie Library, as basic an ingredient of small town Americana as Main Street — and a good deal more enduring. Between 1886, when Andrew Carnegie funded his first American library in Allegheny, PA and his death in 1919, the steel magnate financed 1,679 libraries.

The granting procedure was simplicity itself. If a town wanted money, its mayor or some other town leader would just sit down at his rolltop desk and fill out the proper form, stating the town’s population and what library facilities already existed, and promising that the town would provide both an appropriate site and an annual levy of taxes sufficient to maintain the building. Once Carnegie’s personal secretary okayed the request, the supplicant town received its grant, usually about $2.00 per resident. The grant funded construction, shelving and furniture. The town bought its own books. In this way, grantor and grantee became partners with equal interest in making the new library a going concern.

Connecticut was already rich in libraries, so only 11 Carnegie libraries were built in the state. Several of those have become museums, but all of them keep alive the love of reading which was a vital part of Carnegie’s own life.