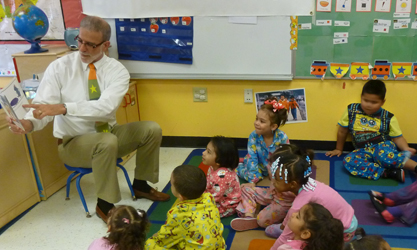 Thanks to an $844,000 three-year grant from the Hartford Foundation for Public Giving through its Brighter Futures Initiative, the Hartford Public Schools significantly improved the reading skills of kindergarten, first and second grade students as a result of the Hartford Haskins Literacy Initiative. Through this pilot literacy project, teachers and other professional staff in five Hartford elementary schools received specialized training to teach reading.  As a result, in year two, kindergarten students improved at a significantly faster rate from fall to spring than the average kindergarten student across the United States (including urban and suburban schools).  More than 75 percent of the second-grade students scored as proficient or above proficient on the state reading test. This proficiency level was 33 percent higher than students who did not participate in the Hartford Haskins Literacy Initiative. Photo: Richard Sussman, Brighter Futures director, reads to children at El Centro De Desarrollo y Reafirmacion Familiar.