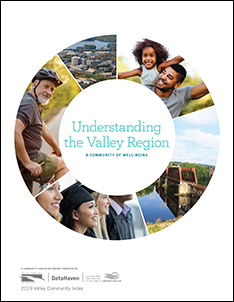 DERBY, CT -- While the Valley has a long history of being a close-knit, family-centered region, disparities among its communities present both challenges and opportunities in addressing health and wellness needs. In partnership with Griffin Hospital and the Naugatuck Valley Health District, more than 40 representatives from a range of multi-disciplinary organizations collaborated to examine well-being and socioeconomic data in the Valley. The findings are featured in the 2019 Valley Community Index, which was released along with its executive summary at a community event in Shelton on Tuesday October 22nd. The report available online at www.valleyfoundation.org.

“Information that is understandable and easily accessible is a key component of high-quality, cost-effective decision making,” said Sharon Closius, Valley Community Foundation President & CEO. “The 2019 Valley Community Index aims to help local leaders understand and proactively address issues impacting the health and well-being of our communities. The more that we know about our region, the better we are able to engage with each other in meaningful dialogues about the pulse of the Valley and what actions are needed to create a more vibrant community.”

This report reflects the most recent data collection efforts to examine the social, economic, and physical health of the Valley’s populations and updates the 2016 Community Index report with new information. The takeaway most reinforced is that health and well-being are not simply about genetics, but are impacted by factors both within and beyond one’s control. Social determinants of health such as diet, smoking, exercise as well as access to a range of services, transportation, employment, public safety, and more, can have a lasting impact on quality of life.

Created in partnership with DataHaven, the 2019 Valley Community Index is a single-source report that provides timely, comprehensive socioeconomic, education, health, and well-being data that is shaping this seven-town region. The Index meets Griffin Hospital’s IRS requirements in Form 990 Schedule H and Notice 2011-52 that discuss the creation of a Community Health Needs Assessment, which all tax-exempt hospitals complete as a result of the Patient Protection and Affordable Care Act. It also fulfills Naugatuck Valley Health District’s requirement for a Community Health Assessment as part of its national accreditation by the Public Health Accreditation Board. The Index serves as a foundation for the Valley Community Health Improvement Plan (CHIP), a requirement for both Griffin Hospital and NVHD.

The 2019 Valley Community Index will be used to convene community conversations, foster engagement, align current efforts and investments, and collaborate on strategic endeavors to build, sustain, and enhance the quality of life in the Valley.

Key findings from the 2019 Valley Community Index include: