Learn more about ALICE and the work that United Ways and many great community partners are doing to help ALICE achieve financial security through an informational webinar hosted by the Connecticut Council for Philanthropy. 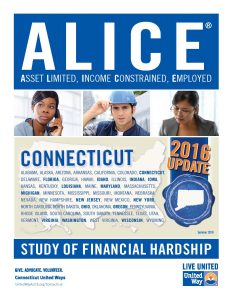 On October 9, 2016, Connecticut United Ways Released their 2nd ALICE Report- the 2016 ALICE Update. ALICE (Asset Limited, Income Constrained, Employed) is an acronym that United Way is using to describe people who work hard yet still struggle to make ends meet. The Initial 2014 Report as well as the recently released 2016 Update aim to better define the true scope of financial hardship, put a face on ALICE and work towards short and long-term solutions for ALICE households. More than one in four (361,521) households in Connecticut are defined as ALICE- having earnings above the federal poverty level but below a basic cost of living. ALICE lives and works in every town and city in Connecticut and may be our friend, neighbor, coworker or family member. Do you know ALICE?