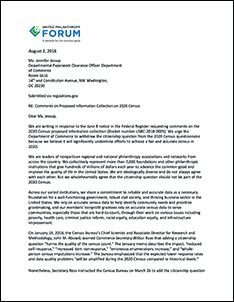 Connecticut Council of Philanthropy was one of 33 philanthropy serving organizations that signed onto a letter opposing the addition of a citizenship question to the 2020 census. They are aligned with more than 300 Foundations that signed their own letter, including CCP members: Fairfield County's Community Foundation; Hartford Foundation for Public Giving; Melville Charitable Trust; and Northwest Connecticut Community Foundation. These efforts were the result of a partnership between United Philanthropy Forum and the Funders Census Initiative of Funders’ Committee for Civic Participation. Both letters were submitted on August 3rd to the Department of Commerce and the Census Bureau along with thousands of other comments from leaders and concerned citizens from across the country.