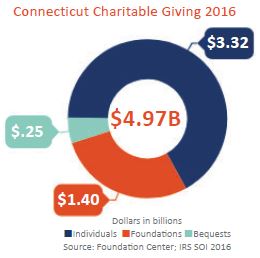 HARTFORD, CT - Individuals and foundations in Connecticut gave $4.97 billion in charitable contributions during 2016*, according to the Connecticut Giving Report, an annual publication of the Connecticut Council for Philanthropy (CCP).

As in past years, the Connecticut Giving Report documents charitable giving by individuals, bequests, and foundations as well as philanthropic trends and insights. This year’s report includes a geographic breakout of foundation giving, a look at foundation giving by population, how much support for the state’s nonprofits flows from out-of-state foundations, and a deeper dive into foundation giving to education.

"Connecticut giving remained strong in 2016. And this is important because we know there are more present threats to a thriving nonprofit sector, like changes to the federal tax code and cutbacks from the state and federal government,” said CCP President Karla Fortunato.

The report uncovered contrasting trends. Foundation giving continued to grow, but individual giving fell. The number of individuals making charitable donations fell, but the percentage of individuals giving in the state increased. Connecticut nonprofits attracted over $400 million from out-of-state foundations, but a small number of nonprofits garnered much of that funding.

* The report covers giving for calendar year 2016, the most recent year available for comparable data. Every year the Connecticut Council for Philanthropy (CCP) collects and analyzes information for this report from a variety of sources including the University of Indiana’s Giving USA, Guidestar, the IRS Statistics of Income Division, and data collected by the Foundation Center.