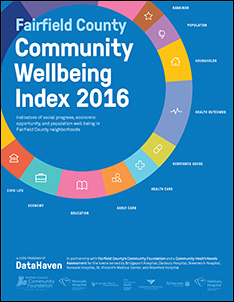 The Community Wellbeing Index studied the communities, populations, and neighborhoods of Fairfield County, as well as the opportunities available and the issues facing the area. Fairfield County’s Community Foundation, a major funder of the report, partnered with DataHaven, area hospitals, and government agencies to help launch a more robust and comprehensive resource that could serve as a part of the hospitals’ and health departments’ Community Health Needs Assessments as well as a broader county-wide indicators program.

The Fairfield County Community Wellbeing Index 2016  is based on a variety of federal and statewide data sources, including the 2015 DataHaven Community Wellbeing Survey, which conducted live interviews with 16,219 randomly-selected adults throughout Connecticut, including 4,962 in Fairfield County in the past year. The survey created extensive information that previously had not been available at a local level, on issues such as happiness, health, the effectiveness of local government, financial security, access to resources and basic needs, transportation, and other social and economic issues.

“The process of developing this report allowed local partners and community members to identify links between the well-being of residents and the places where they live. Looking beyond typical measures like income levels or unemployment rates, the Community Wellbeing Index reveals a much more uneven distribution of opportunities in areas such as neighborhood walkability, economic development, public health, and education. The impact that these barriers to opportunity have on overall well-being and happiness will serve as a call to action for many groups working to improve Fairfield County’s diverse neighborhoods and towns,” stated Mark Abraham, Executive Director of DataHaven and a lead author of the report.

Insights from the Fairfield County Community Wellbeing Index 2016 include:

More insights can be found at http://fccfoundation.org/community-impact/research-publications/all-rese..., as well as on the DataHaven website.

About DataHaven
DataHaven is a non-profit organization with a 25-year history of public service to Greater New Haven and Connecticut. Its mission is to improve quality of life by collecting, sharing, and interpreting public data for effective decision-making. DataHaven is a formal partner of the National Neighborhood Indicators Partnership of the Urban Institute in Washington, DC. More about DataHaven can be found at www.ctdatahaven.org.